DevOp Tool to automate apps and infrastructure of projects as well as configure and administrate server environments.

The more servers a company has to manage the more increases the expenditure of time for configuration and management. In addition, by exceeding use of manual activities both transparency and quality are getting lost. In such cases are automation tools like Ansible the best solution. Ansible makes deployment, operation and scaling much easier.

Ansible is the simplest way to automate apps and infrastructure as well as projects where it is used for configuration and administration of servers. It is available under the GNU General Public License for DevOps around the world as open source software. The maintainer is Michael DeHaan, who started the project some day in February 2012. About a year later in March 2013 the company called Ansible Works has been founded. The company offered various products and support services around Ansible. In October 2015, Red Hat, Inc. acquired Ansible Inc. and transferred it into it’s product portfolio. Meanwhile Ansible is used for automation in many reputable companies. 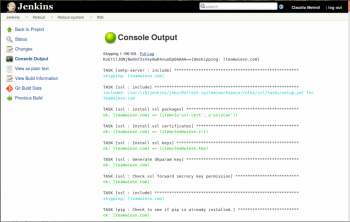 Ansible is one of the tools you prefer to use when you want to automate something that can not be done manually anymore. Because you need to reduce expenditure of time and want to improve quality control as well as transparency on what you are doing. In our opinion, counterpart other tools of this kind (e.g. Puppet, Chef, SaltStack etc.) Ansible offers the following advantages:

AlphaNodes Ansible Playbooks: An Ansible Playbook is an aggregation of scripts that defines work for a server configuration managed by the Ansible automator tool. The Playbooks that we make available to the public can be found at Ansible Galaxy.

Infrastructure Automation is worth it

Infrastructurr Automation is because of it’s complexity sure not an easy going topic. It will take some time to learn about the technology, concepts and the systems. But we think because of it’s enorm potential it is worth the effort. Because every company (even small one’s) profit from a stable, secure IT system, reproducible deployment processes and automated solutions.